I had a Reichenbach fall. No, really. Literally. I actually fell.
Now, much as I’d like to say that I felt so overwhelmed, was so overcome by emotion at the sight of the Reichenbach falls, where my hero, Sherlock Holmes, fell to his “death” that my knees gave out and I fell – that would not be the truth. What really happened was that there were some slippery paths on the hike, and I simply slipped and fell.


But it is still “cool” to say that I had a “Reichenbach fall”, however humble it may have been compared to the Master.
Anyway, to begin at the beginning, I arrived at Meiringen on a train (from Zurich, via Luzern, where you have to change trains). The train from Luzern to Meiringen is what they call a “panorama coach” – it gives you a gorgeous view of the Swiss countryside all through the journey.


The wonderful, amazing people at Haslital Tourismus chalked out an itinerary for me (the full itinerary will be put up in the next e-magazine). I was met at the Meiringen station by my lovely tour guides – Anja and Hannes, who then took me on the Reichenbach Funicular. 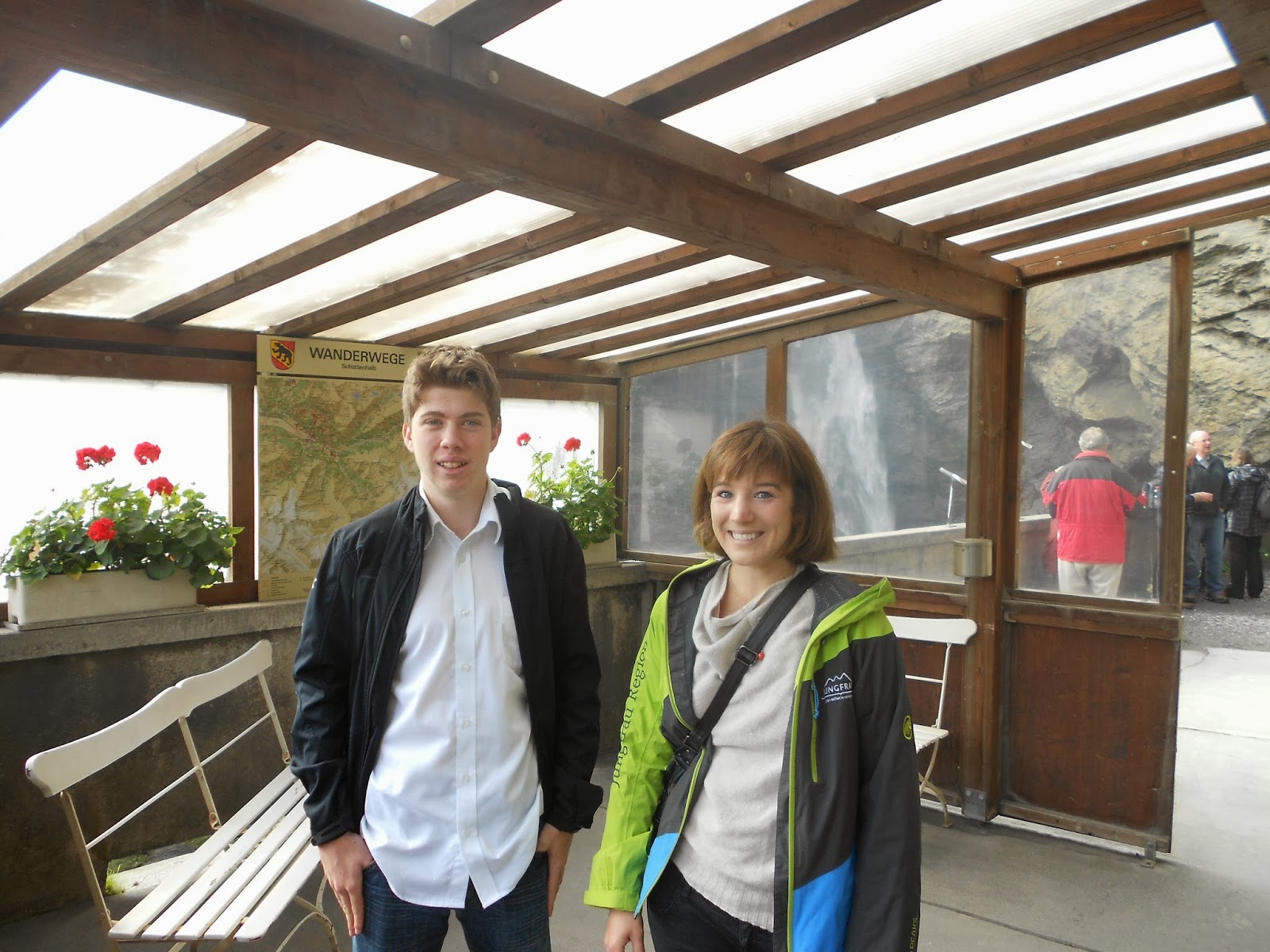 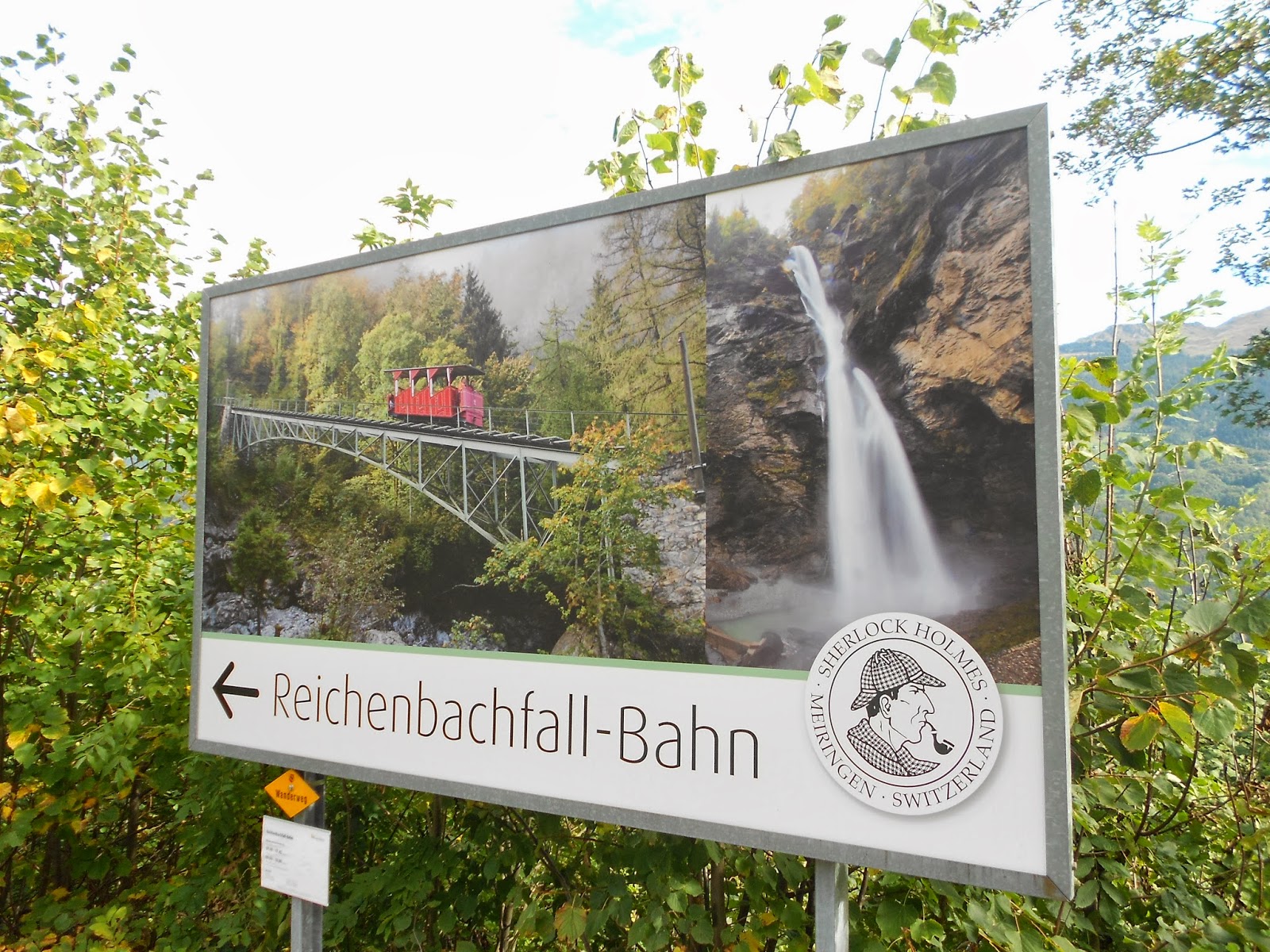 The stop has a small gallery with some interesting Sherlock Holmes artefacts. Also, there is a Sherlock Holmes cut-out you can put your face in and photograph! We did, obviously. 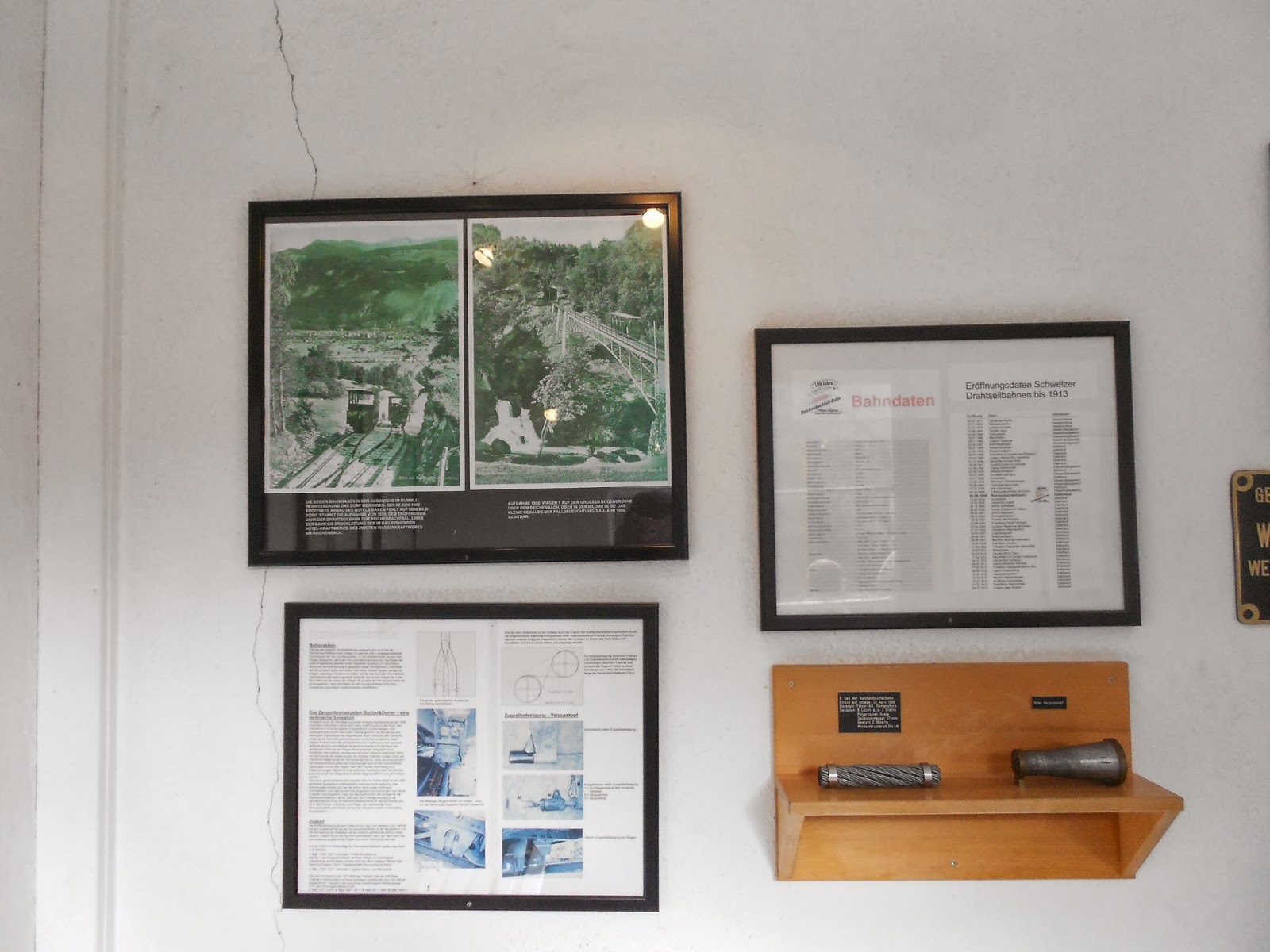 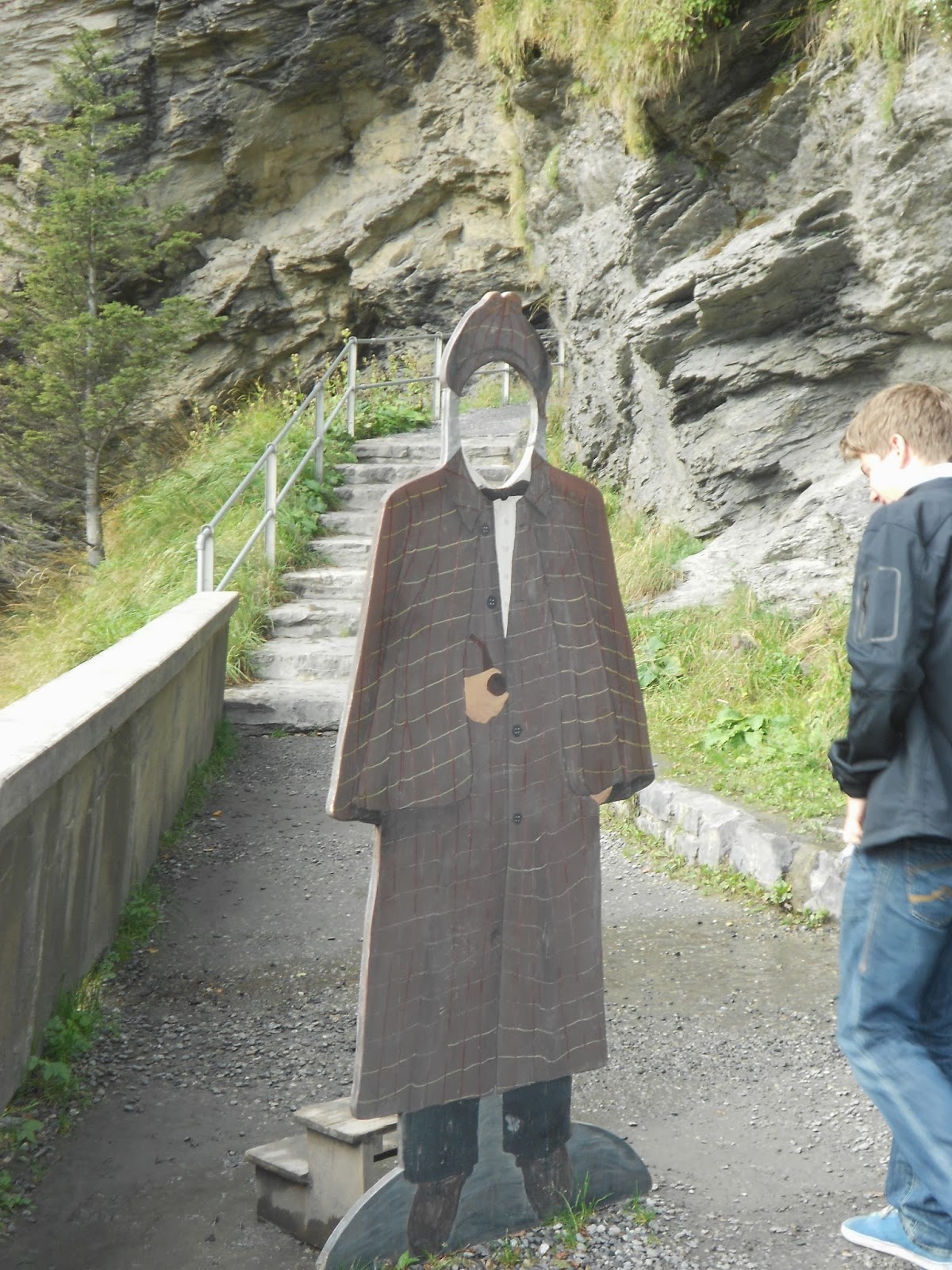 Then began the hike. Probably the most strenuous thing I have done in my adult life. Fat, lazy, city-creature that I am, I stopped every two minutes, gasping for breath and wanting to take a break. Anja and Hannes were very, very kind and encouraging – and all the credit for my successful climb is owed to them. The falls are beautiful. Breathtaking. And for us Sherlockians, emotional. 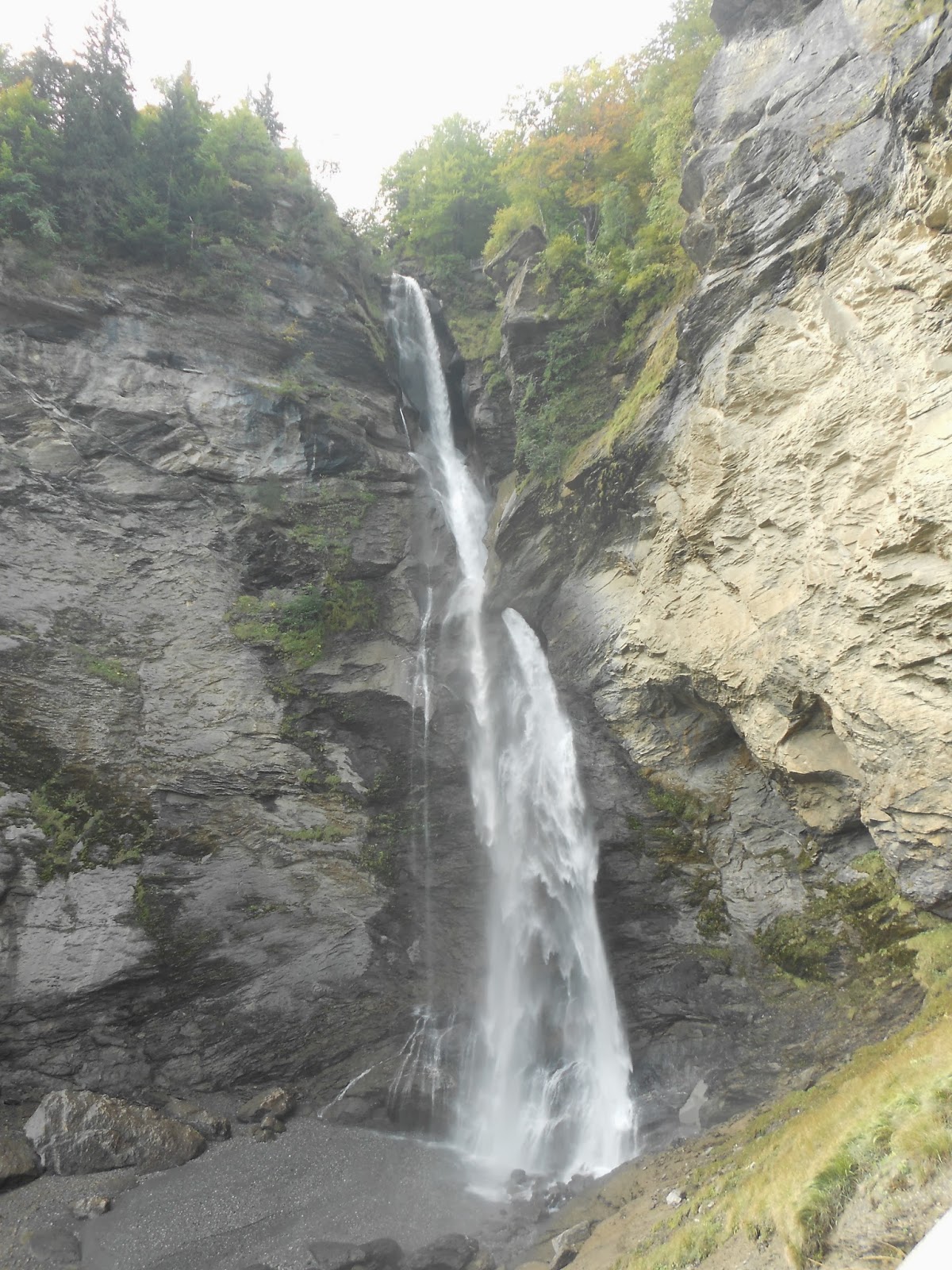 Words from “The Final Problem” flit through your mind as you look down at the forceful water and the abyss below. It is not difficult to imagine Sherlock and Moriarty tumbling down the walls, and then Sherlock climbing up. I can only imagine the amount of perseverance and strength it must have taken for him to make the climb.
The spot where Sherlock and Moriarty fell has been marked with a large white star, which is visible from the other side. There is a plaque, put up by The Bimetallic Question of Montreal and The Reichenbach Irregulars of Switzerland. There is also a wreath, put up by Deutsche Sherlock Holmes Gesellschaft (the German Sherlock Holmes Society). 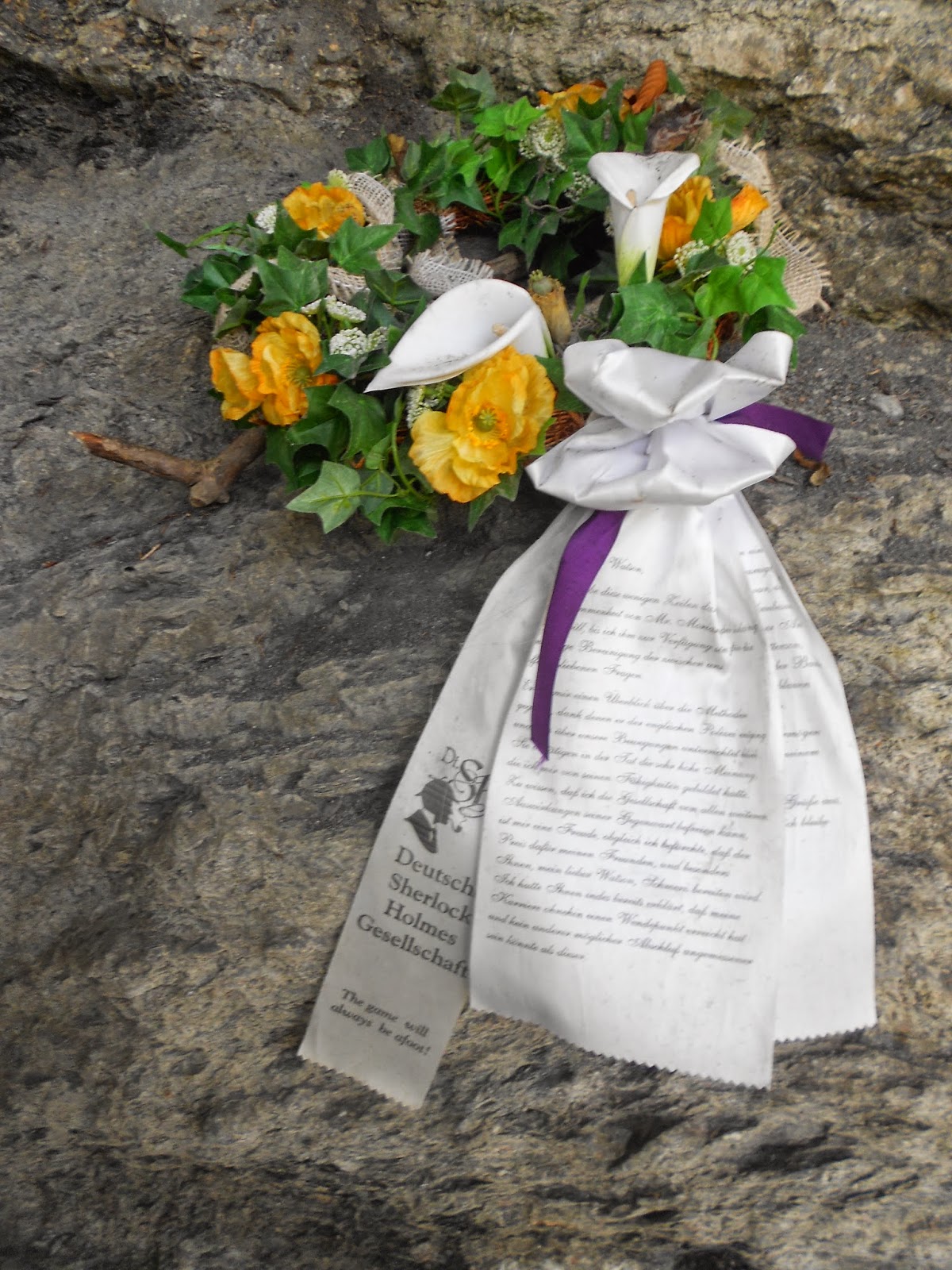 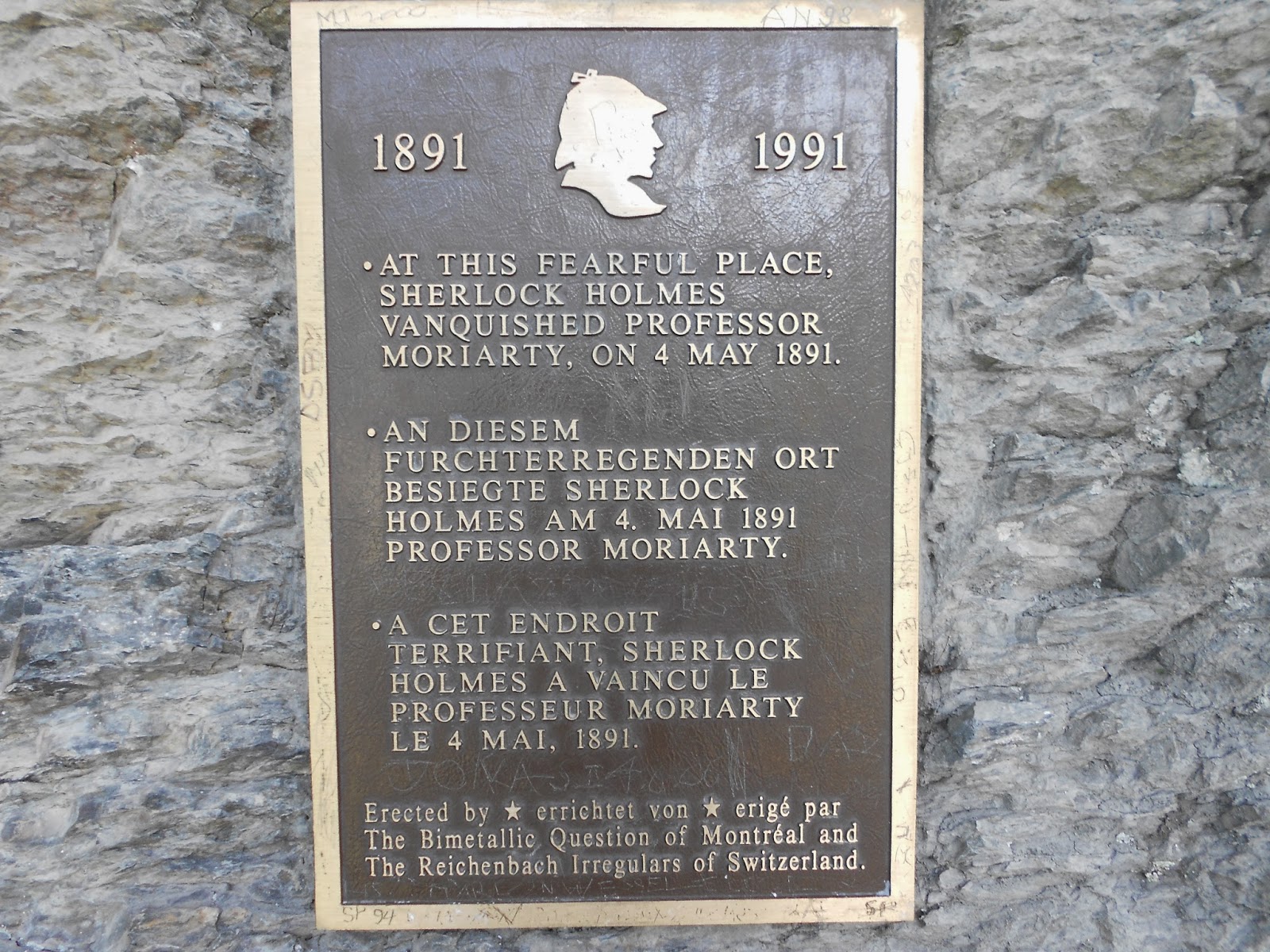 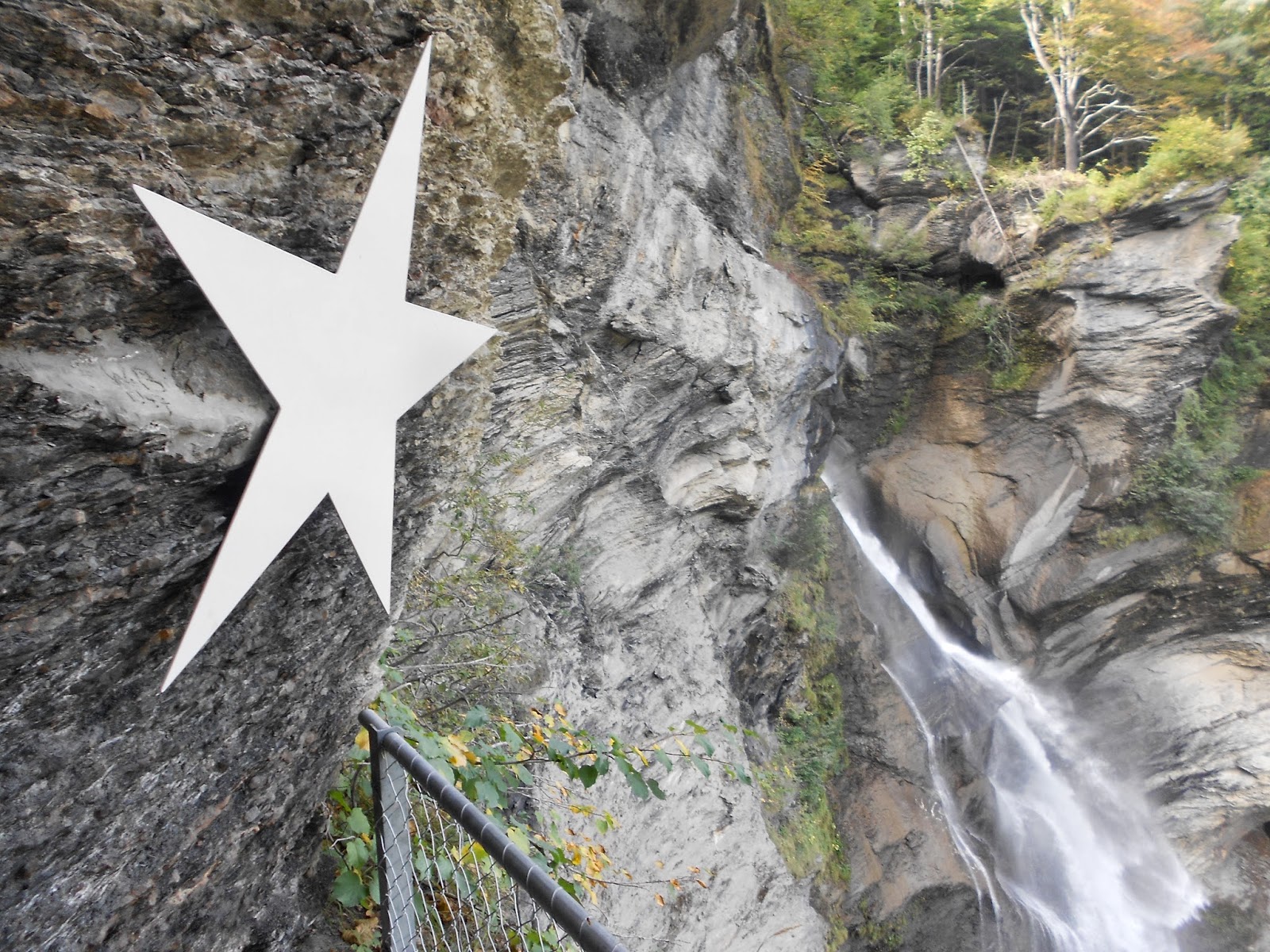 It was on the way down from the “spot” that I had my little fall. Anja was kind enough to suggest that maybe my shoes were not as suited to a hike – and thus responsible for my fall, rather than my uncoordinated idiocy. Maybe my subconscious decided that I needed to take at least a small fall at Reichenbach to have something in common with Sherlock! Anyhow – a small incident, I escaped without a scratch and barely a bruise or two. What can I say except - Sherlock watches over me?
Anja and Hannes were super-careful after that, and helped me out wherever the grounds were slippery. They even changed the route and took the longer way down – which was a paved road, rather than the trail through the woods.
Hannes had to take our leave subsequently, and Anja took me to lunch at Aare Gorge. By then, it was time for another appointment for Anja, and exploring Aare Gorge would have meant walking a lot more (and I’d really had my quota for the day by then, and was itching to see the Sherlock Holmes statue and the museum) – so Anja very kindly drove me back to Meiringen.
I checked into Hotel Alpbach – the suggestion for which had come from a Swiss Sherlockian, through Ales, the President of the Czech Sherlock Holmes Society. It was a quaint little hotel – quite adorable, really. A stone’s throw away from the Sherlock Holmes Museum. 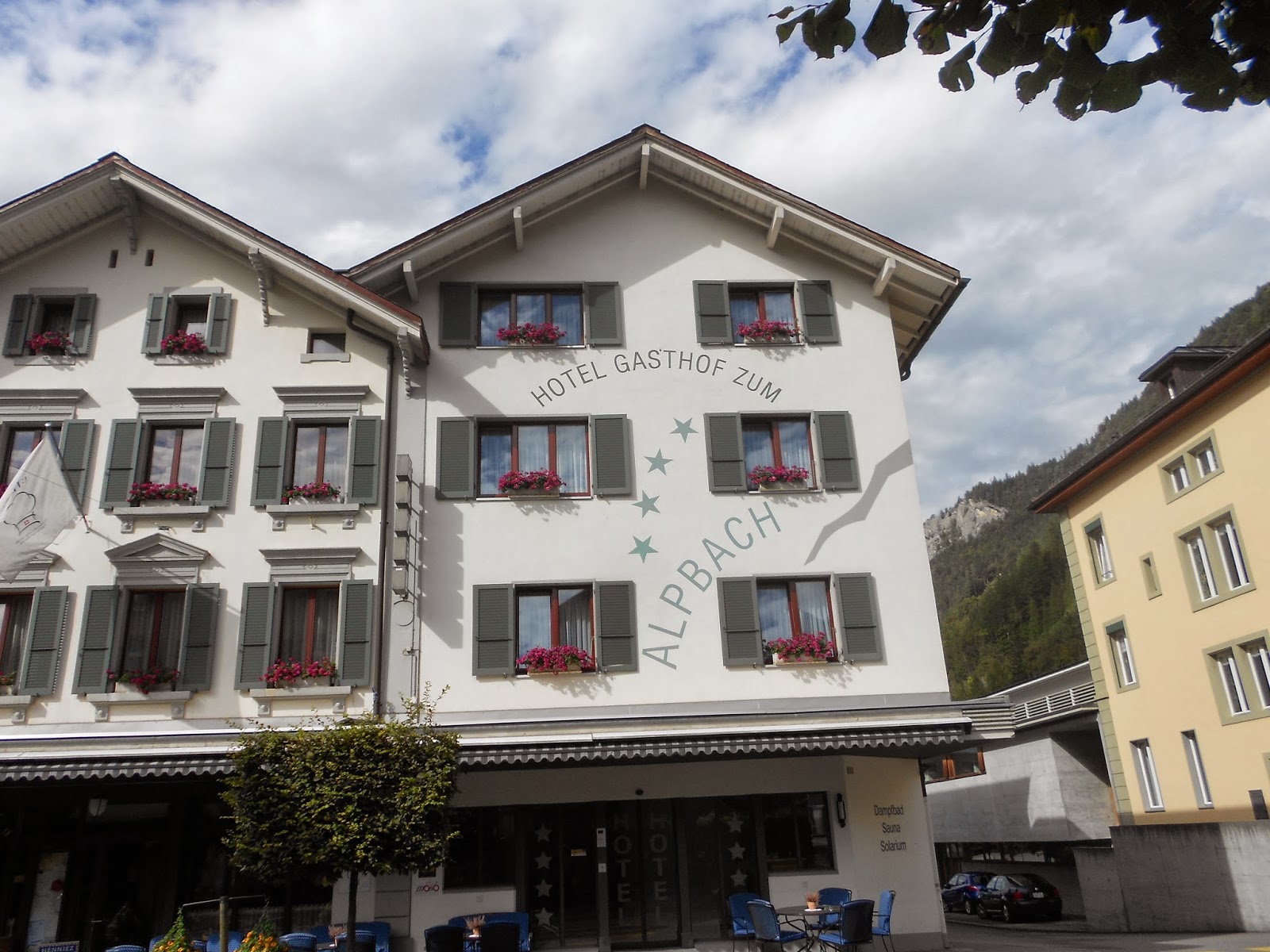 Of course, I dumped my luggage at the hotel and headed out to the Sherlock Holmes Museum. 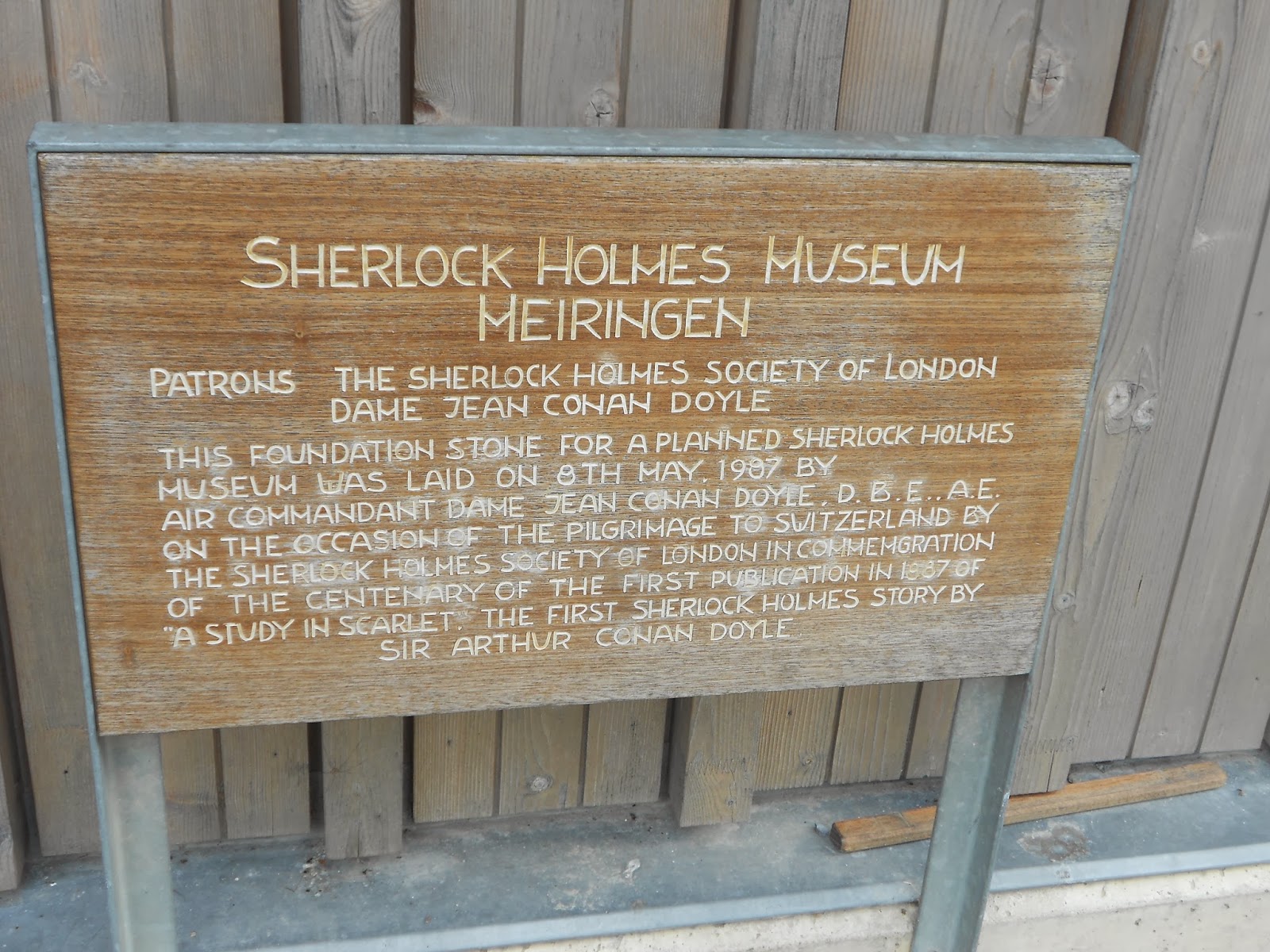 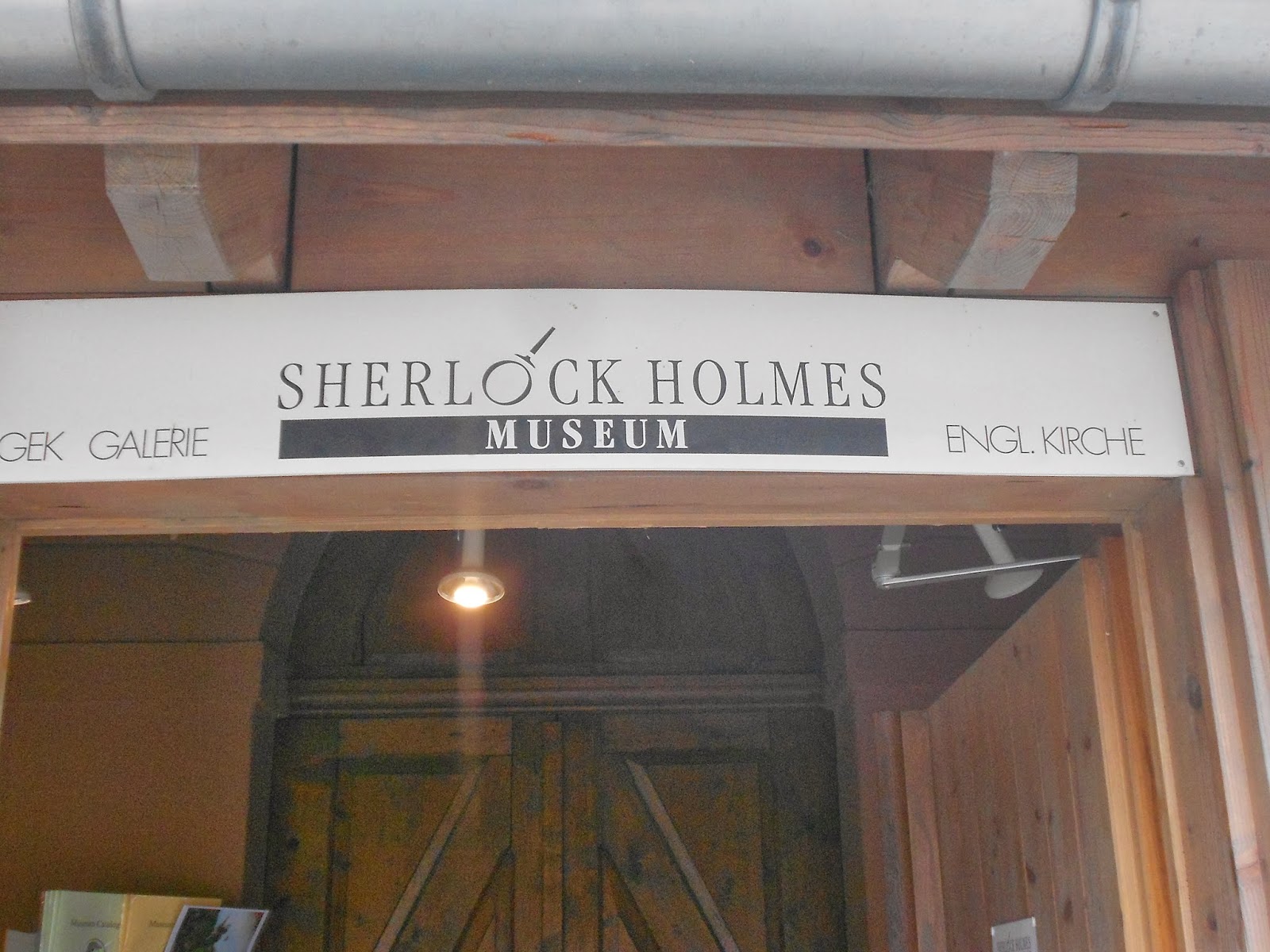 The museum is built like a church – it is small, but quite nice. 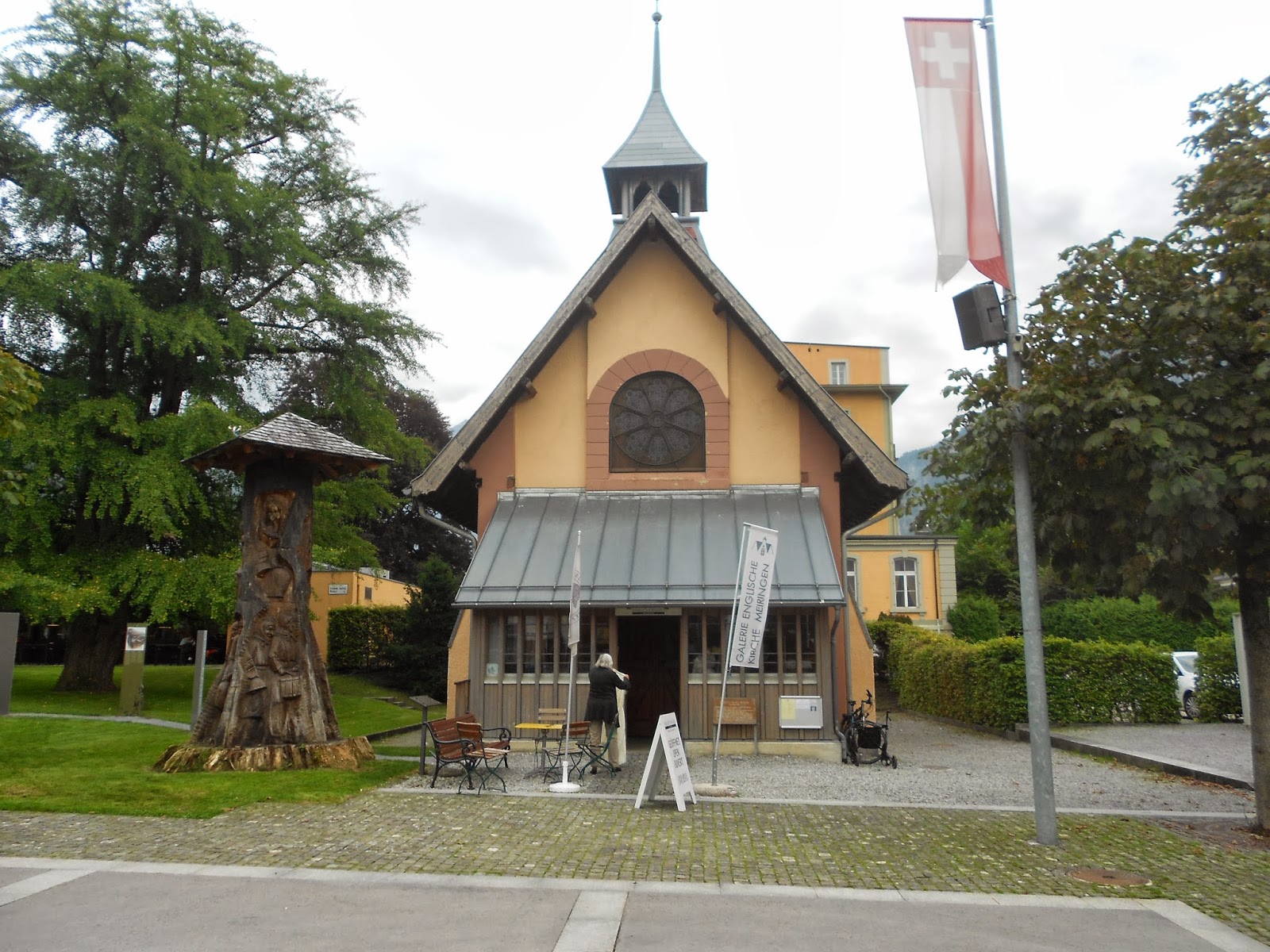 It has an authentic replica of the living room of Sherlock Holmes and Doctor Watson, a replica of Turner’s Falls of the Reichenbach – and many, many Sherlockian goodies. (Needless to say, I picked up a good few.) 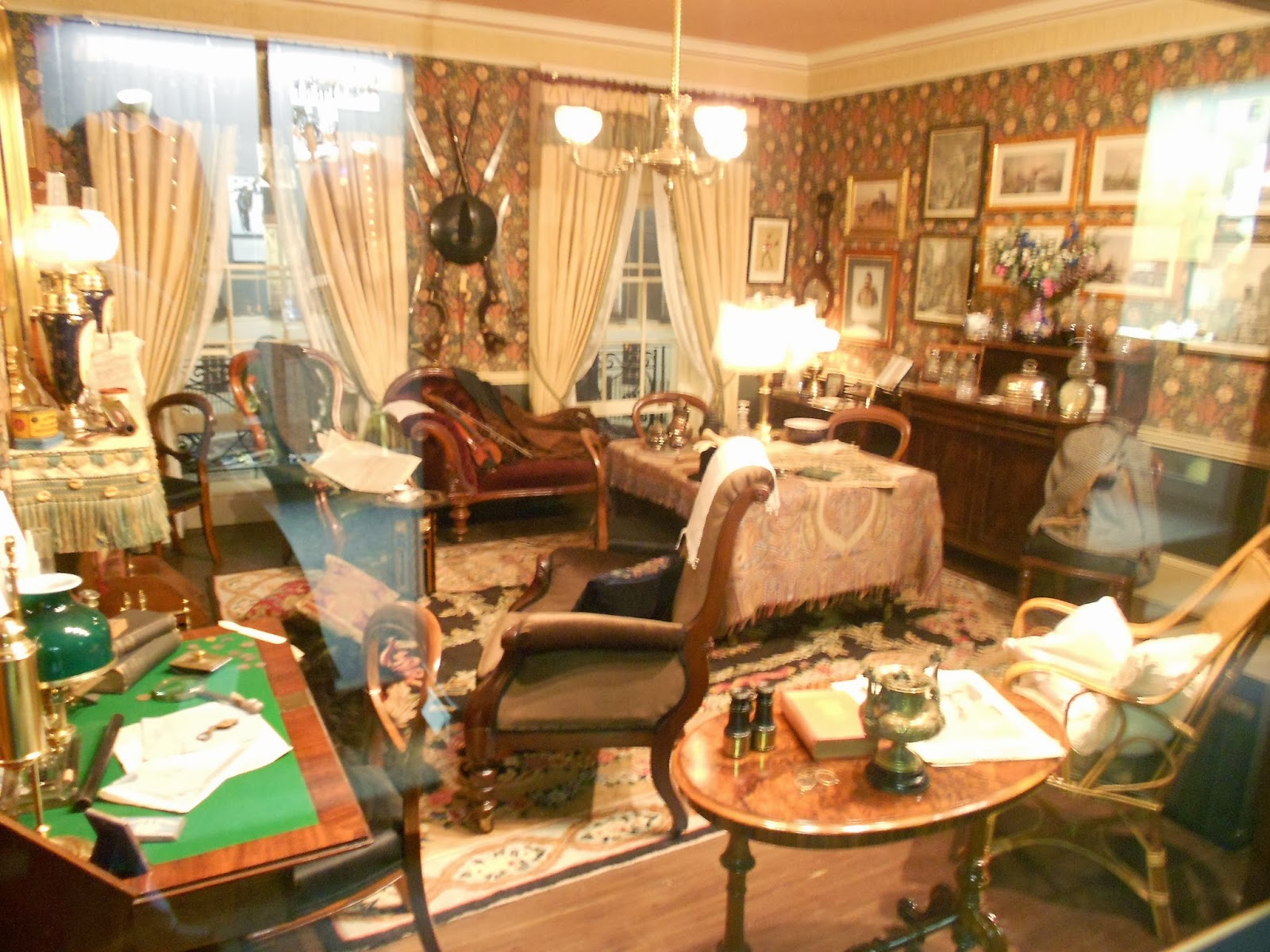 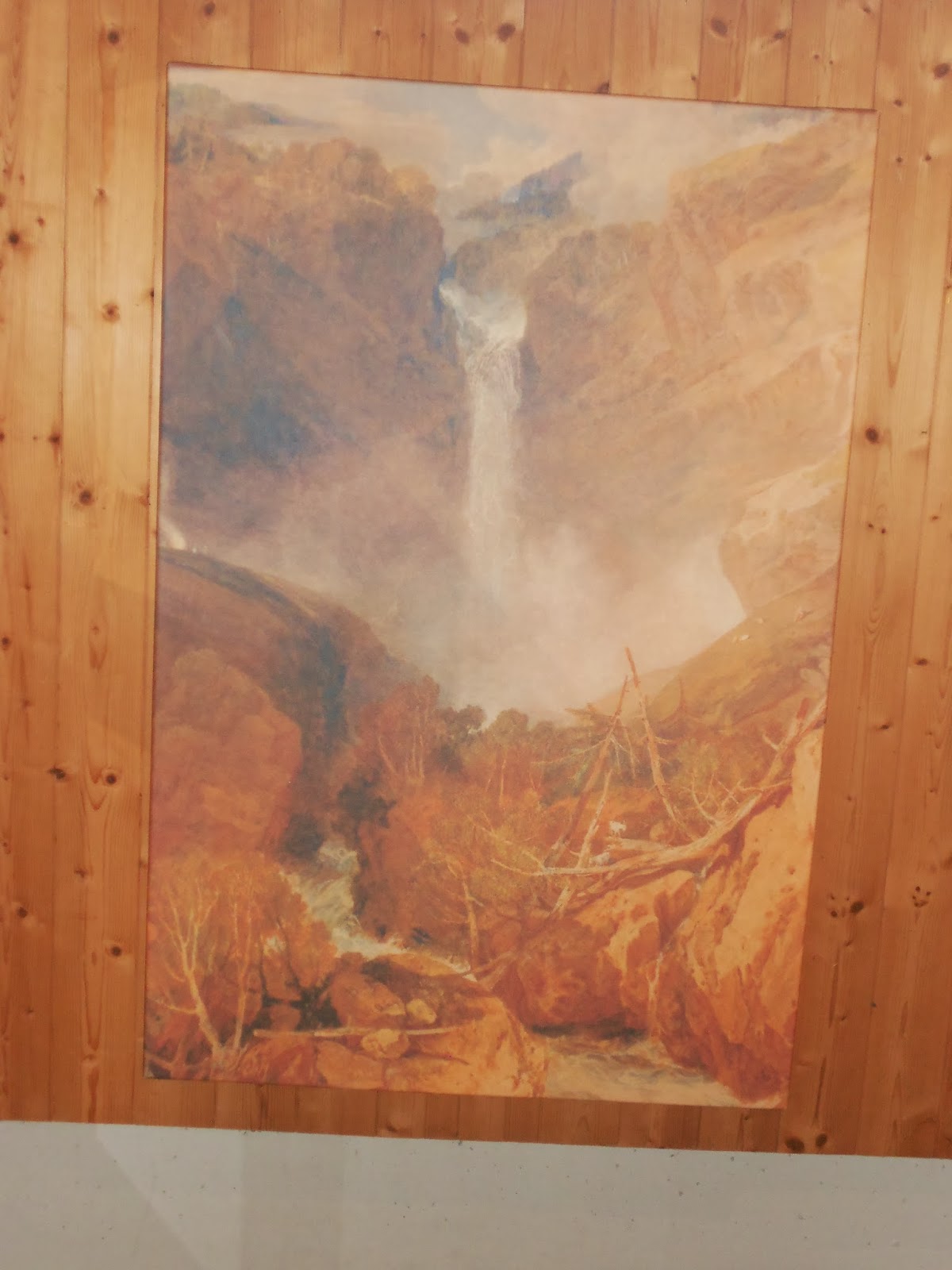 Did you know that Sherlock Holmes is an honorary citizen of Meiringen? No, really. There’s a certificate and everything. 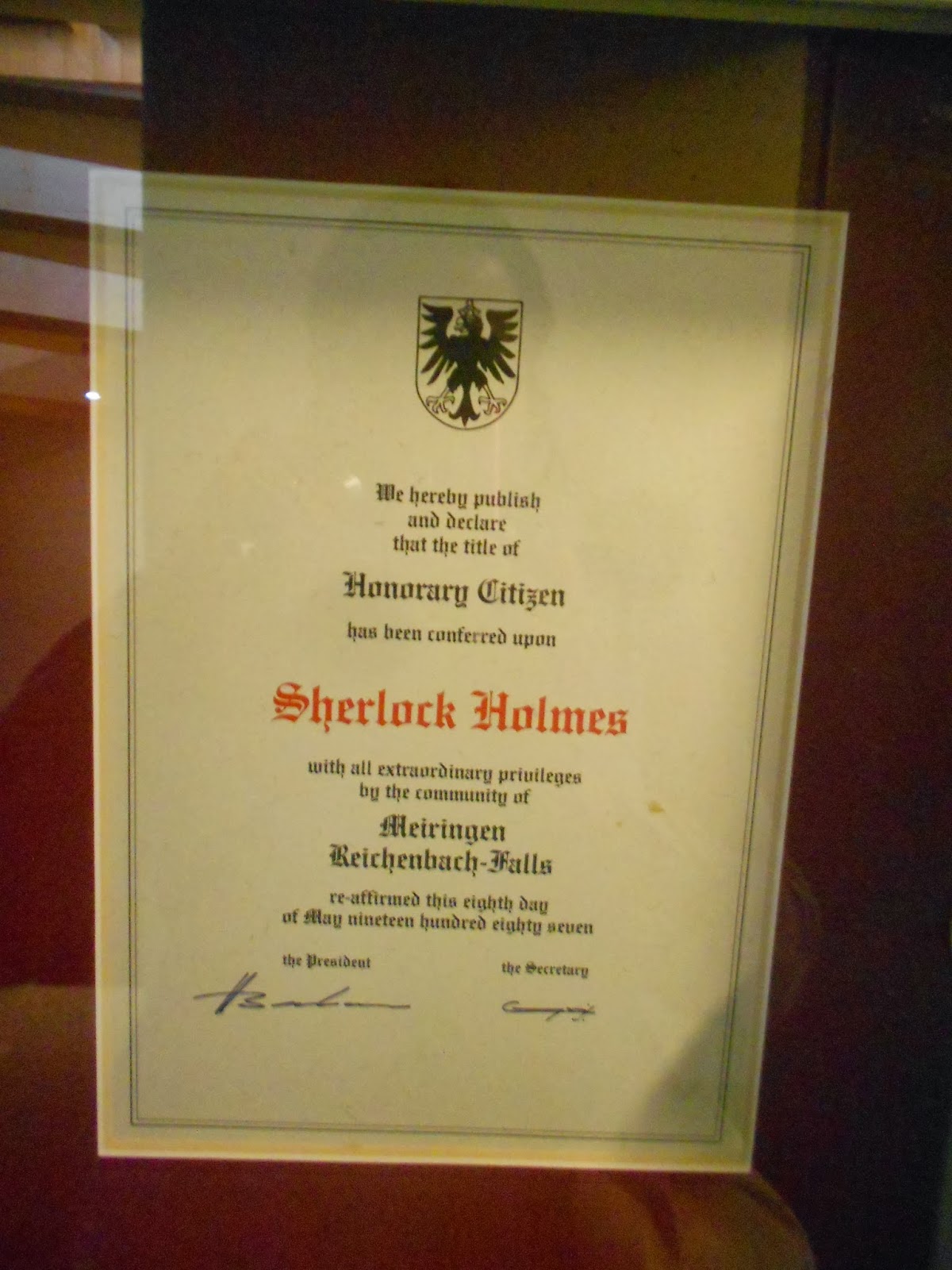 The statue of Sherlock Holmes at the centre of the town was made by John Doubleday – yes, the same sculptor who made the one outside the Baker Street tube station in London (which is where 221B Baker Street would have been). 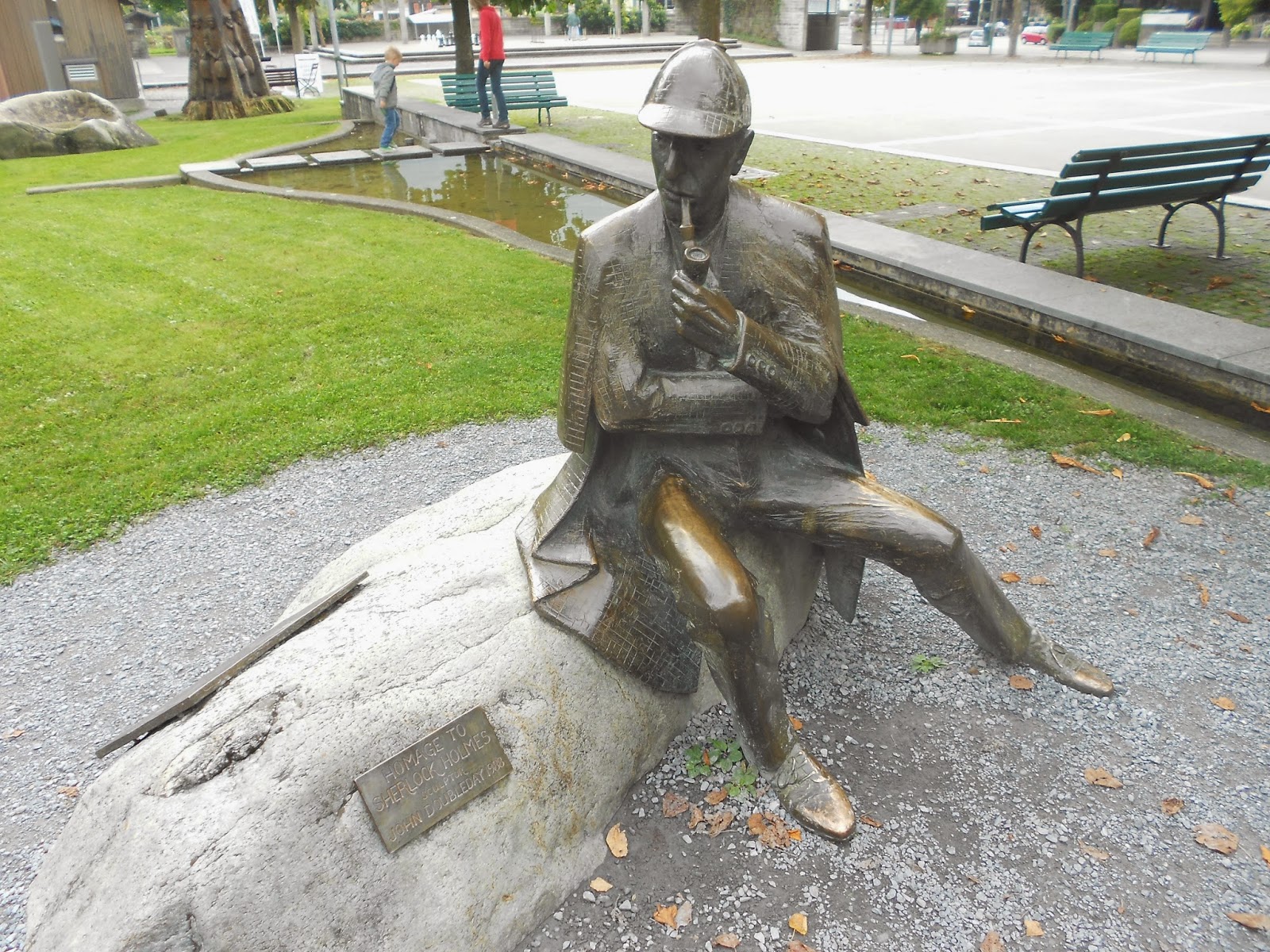 It is said that all sixty canon stories have been incorporated in some obscure manner in the statue and its surroundings – and that this remains an unsolved problem. 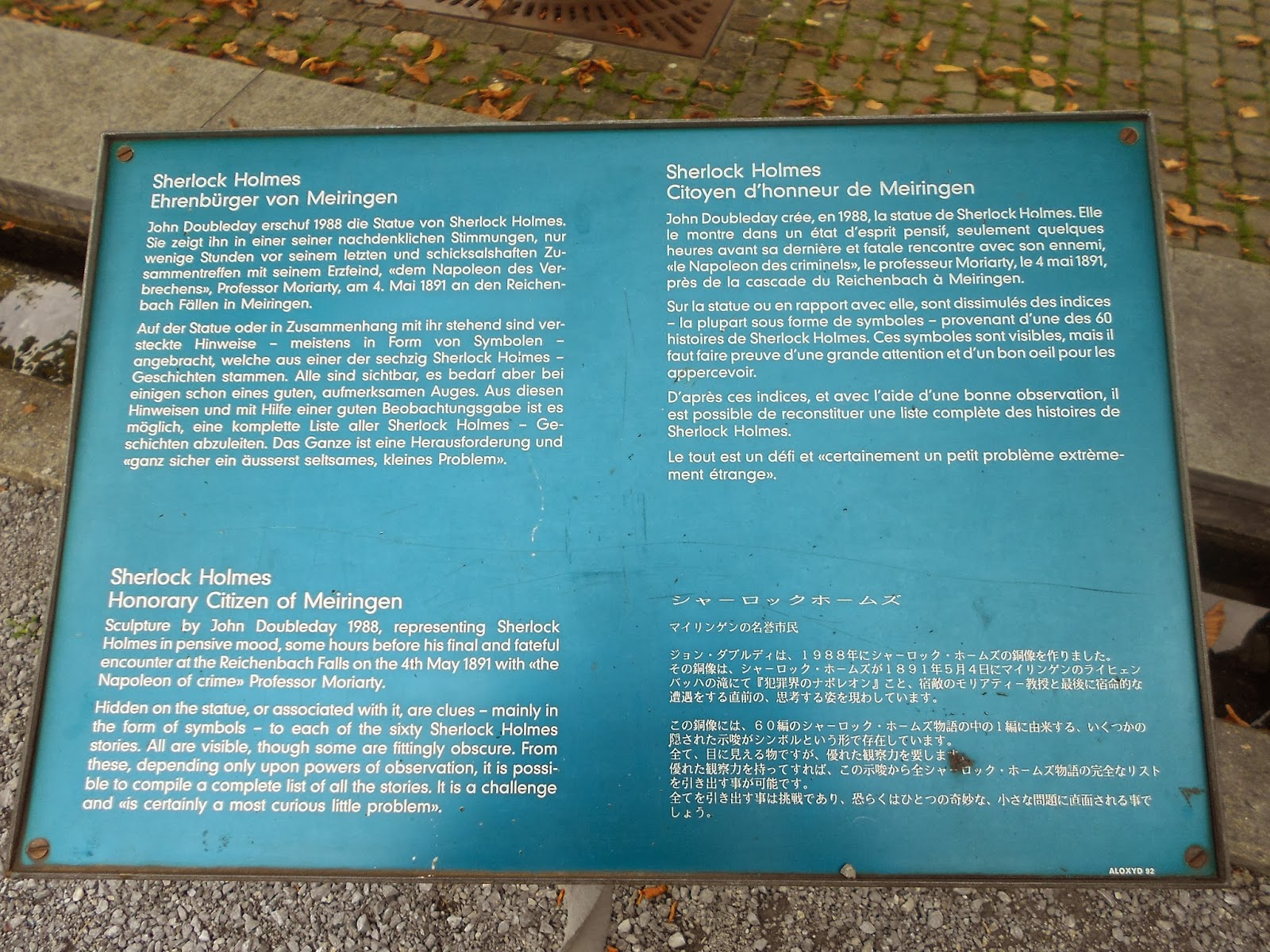 (There is a contest for this as well – details in the next e-magazine.)
Just after the museum, there is Park Hotel du Sauvage – which was originally the Englischer Hof where Holmes and Watson stayed during their trip. Now modernised and refurbished, of course – but just like everything else in Meiringen – quaint. 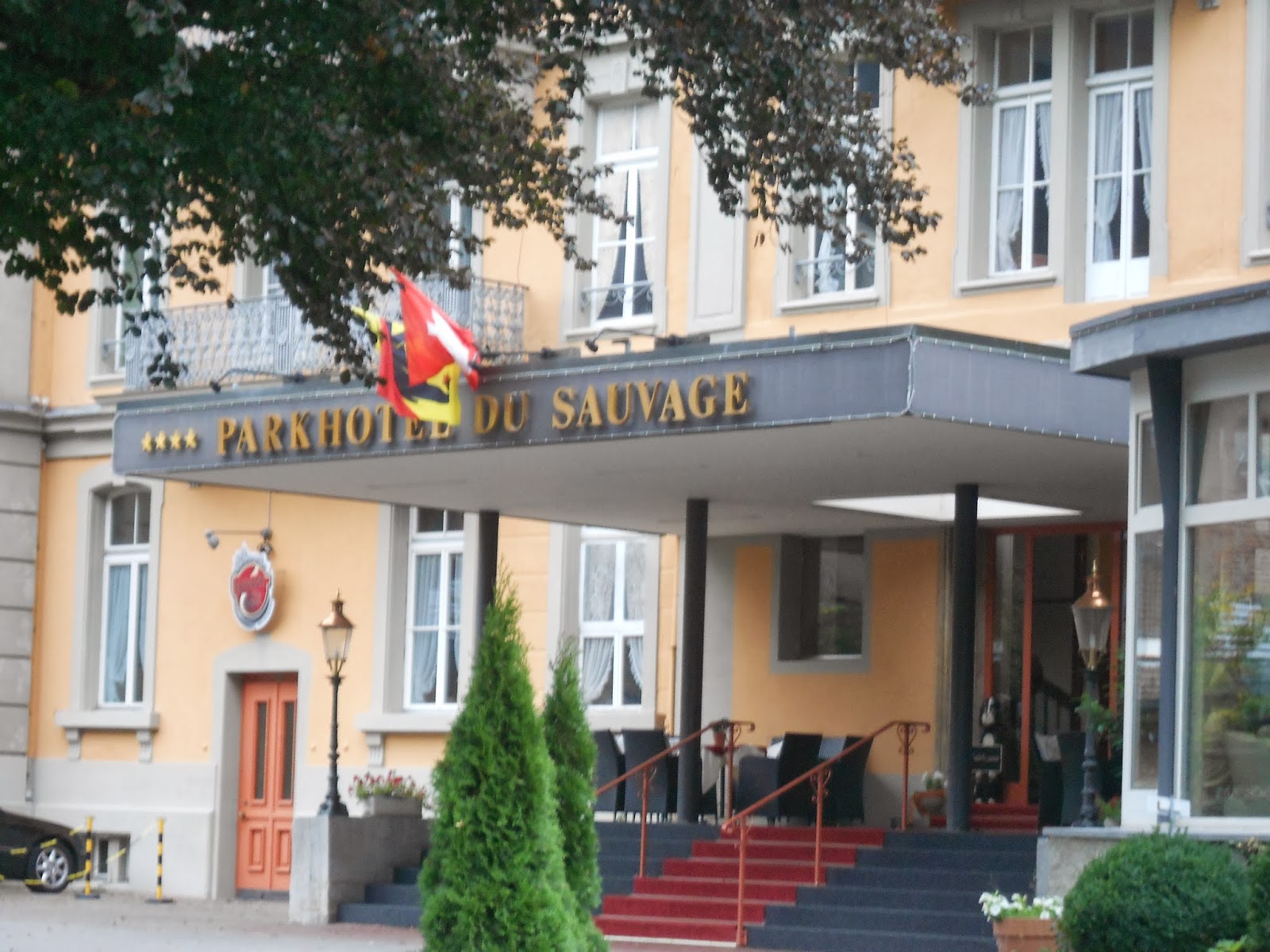 Also, thanks to Olaf Maurer, the President of the Deutsche Sherlock Holmes Gesellschaft, who very kindly drew me a map for the Jeremy Brett walk – I got to see the place which was the Englischer Hof for Jeremy Brett and David Burke. 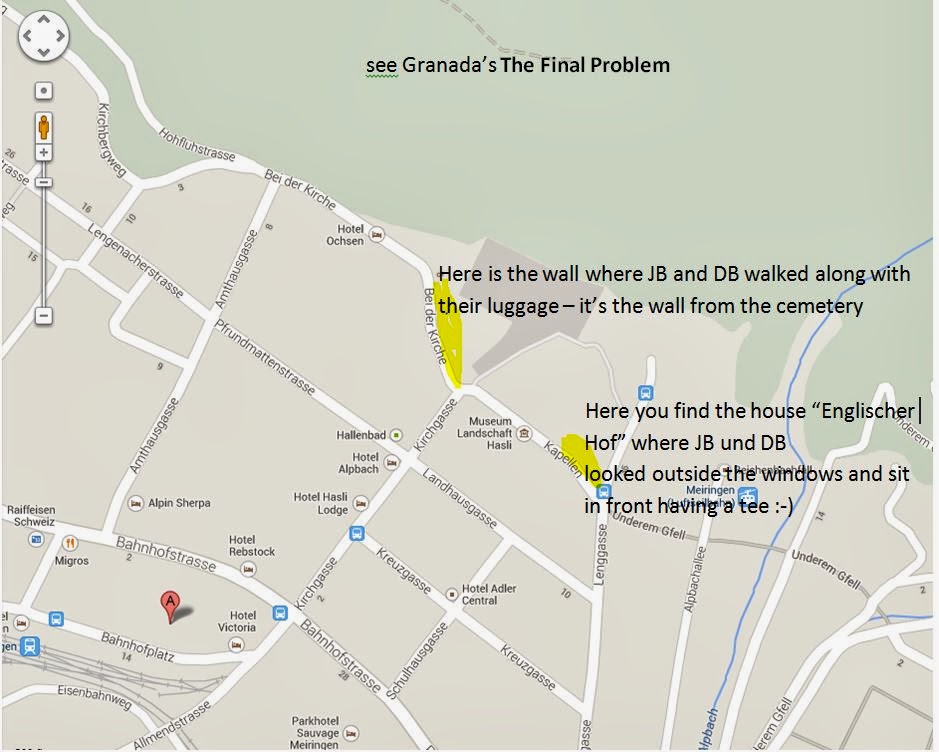 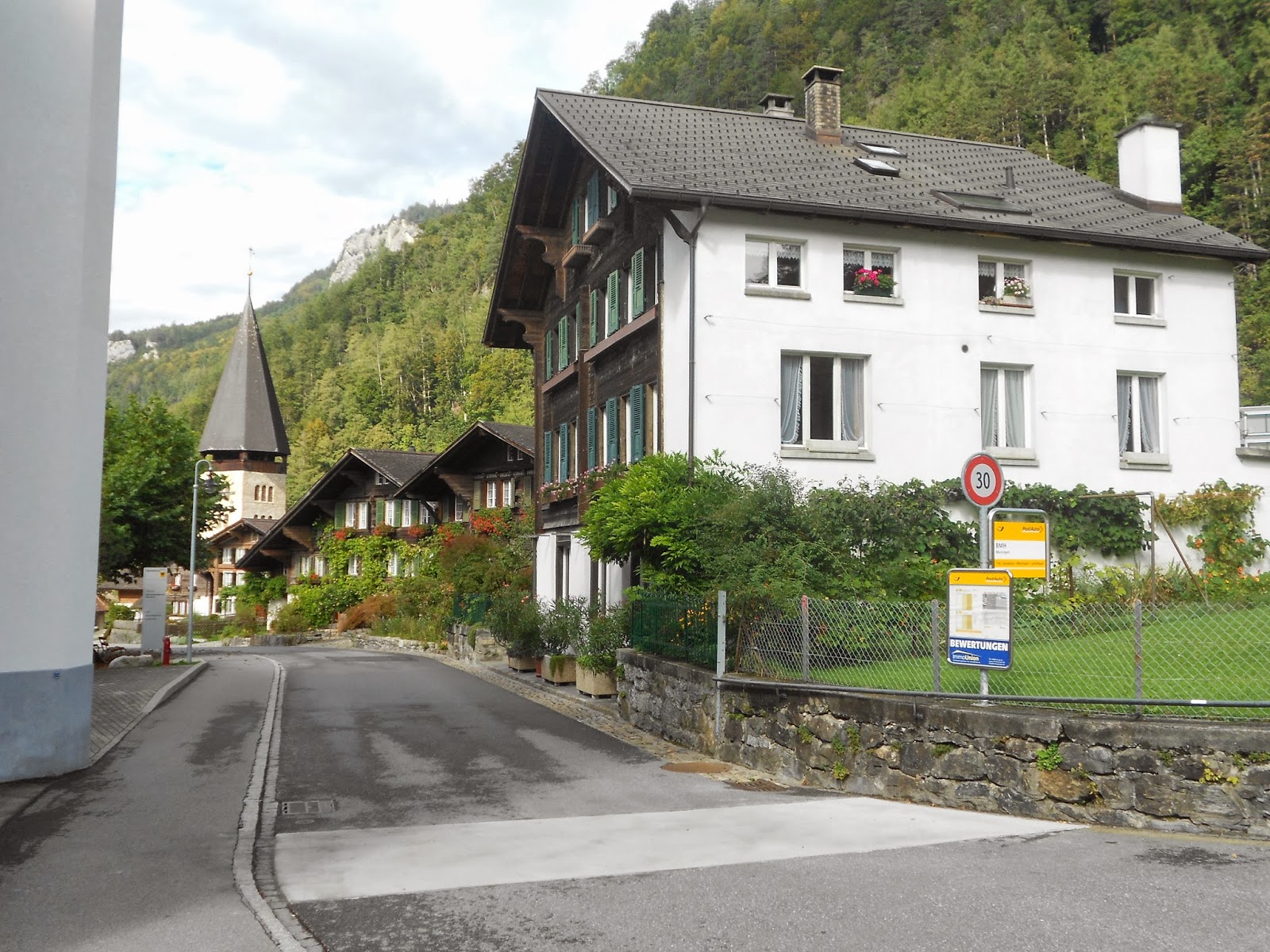 So, all in all – Meiringen is a must-visit on your Sherlock Holmes Pilgrimage list – and it is undoubtedly one of the loveliest places I have ever been to. It looks like a series of picture-perfect postcard images. 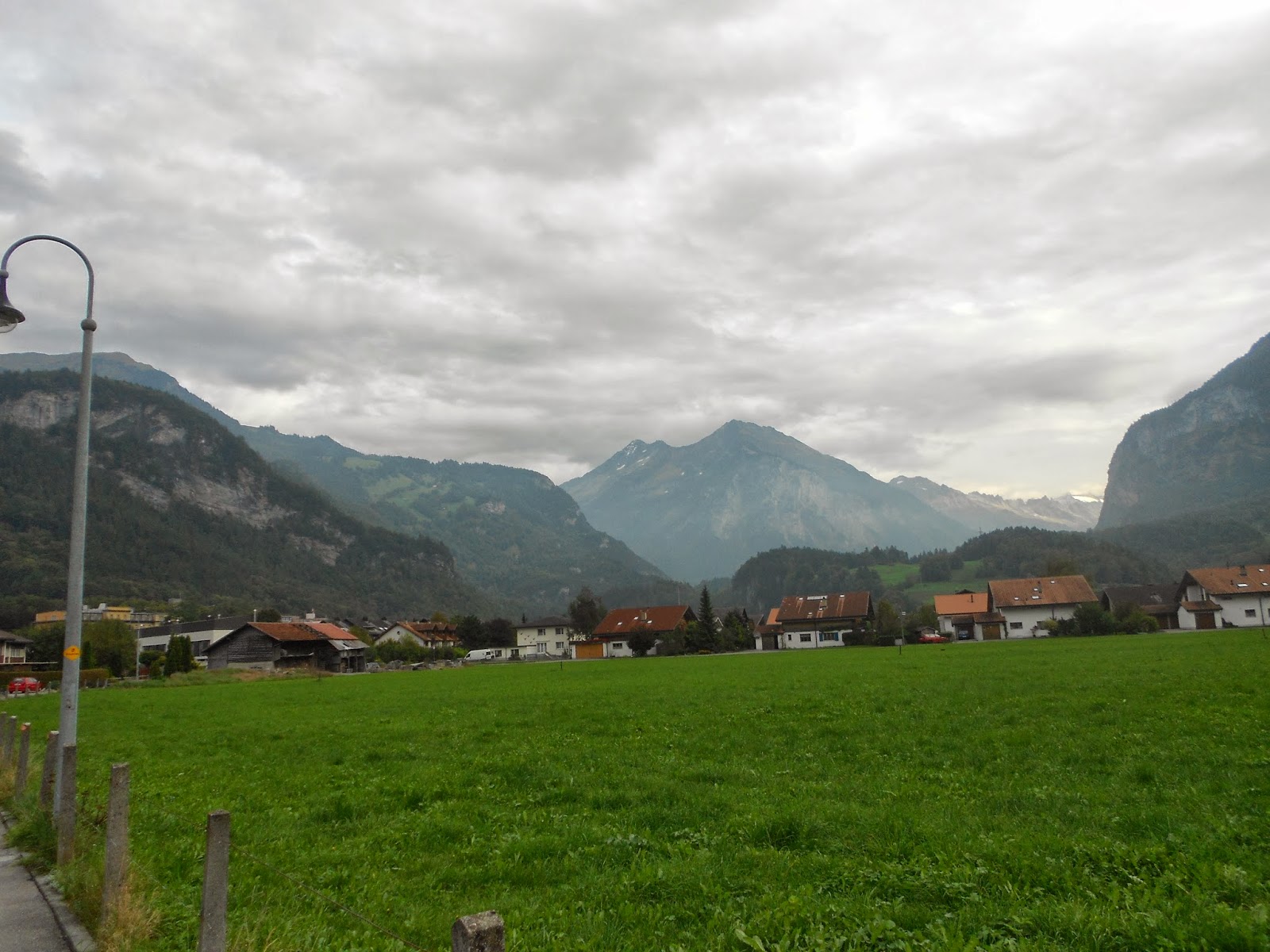 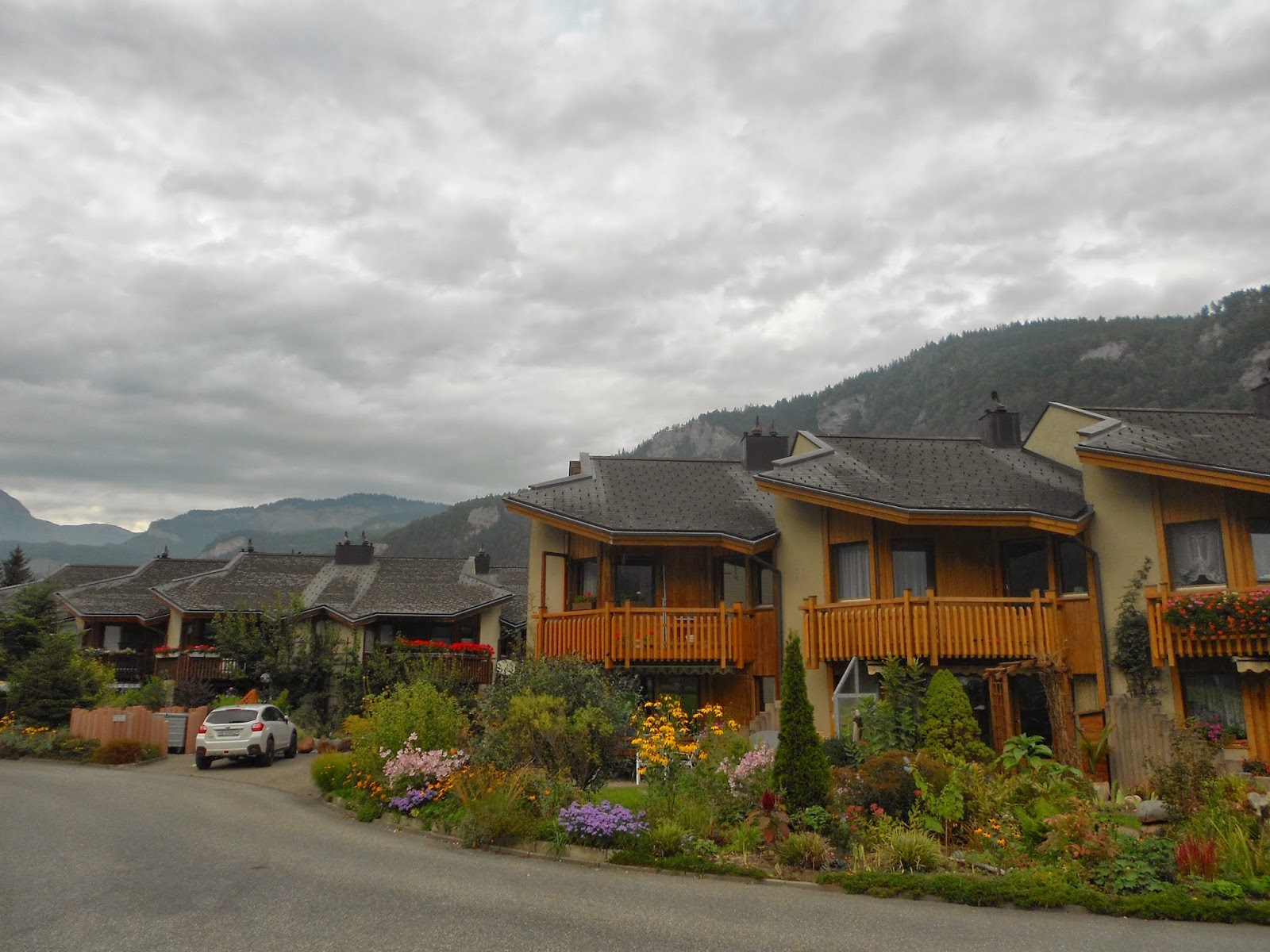 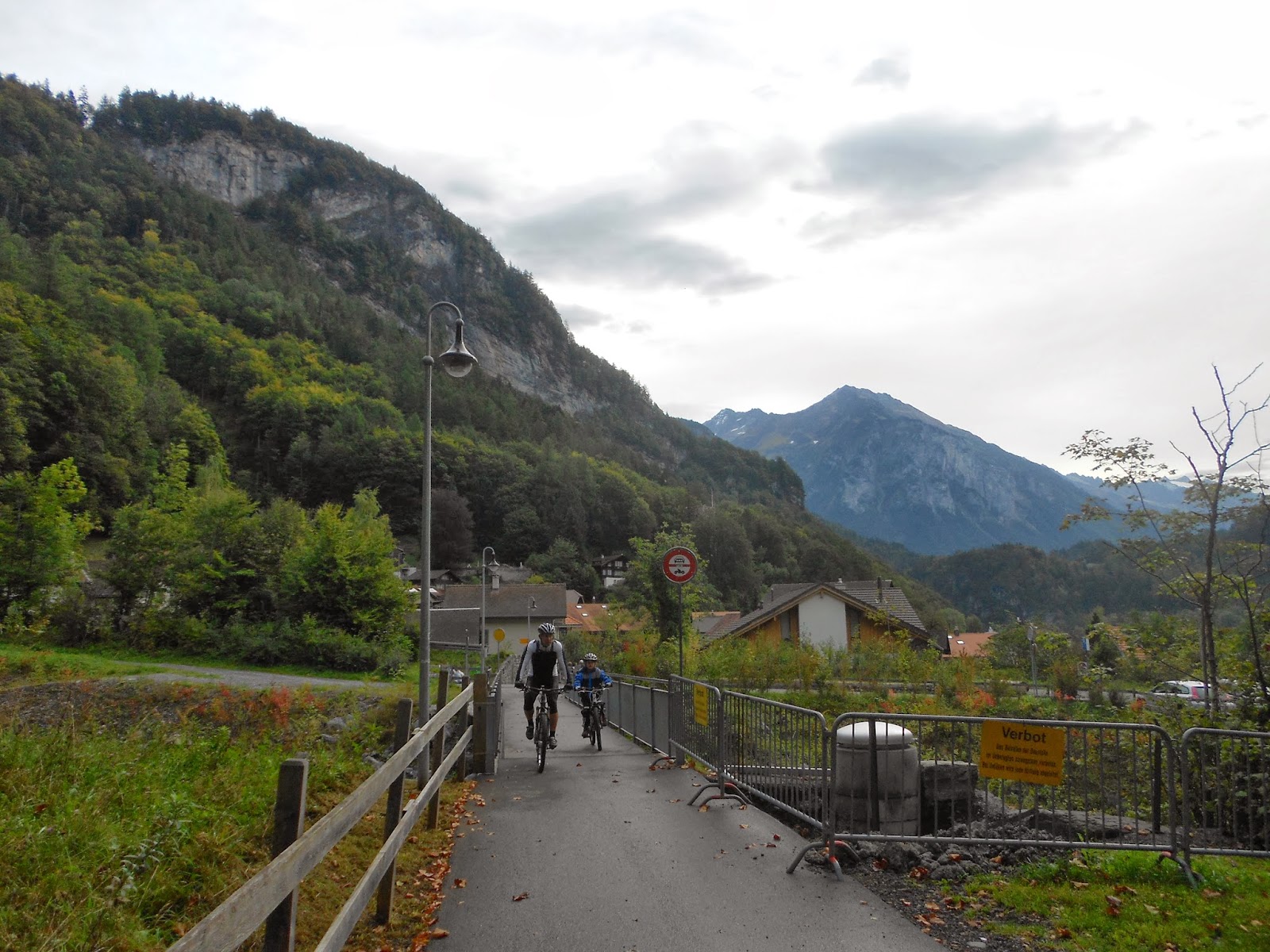 It is easy to imagine why Sherlock Holmes would choose to go to this beautiful place knowing death was imminent. The place literally exudes peace, serenity – and even if Sherlock was in the most melancholy of moods, he would feel better just walking through the town. And really, if you knew you were dying, wouldn’t you want to be in the most beautiful place you could think of so you would die happy? 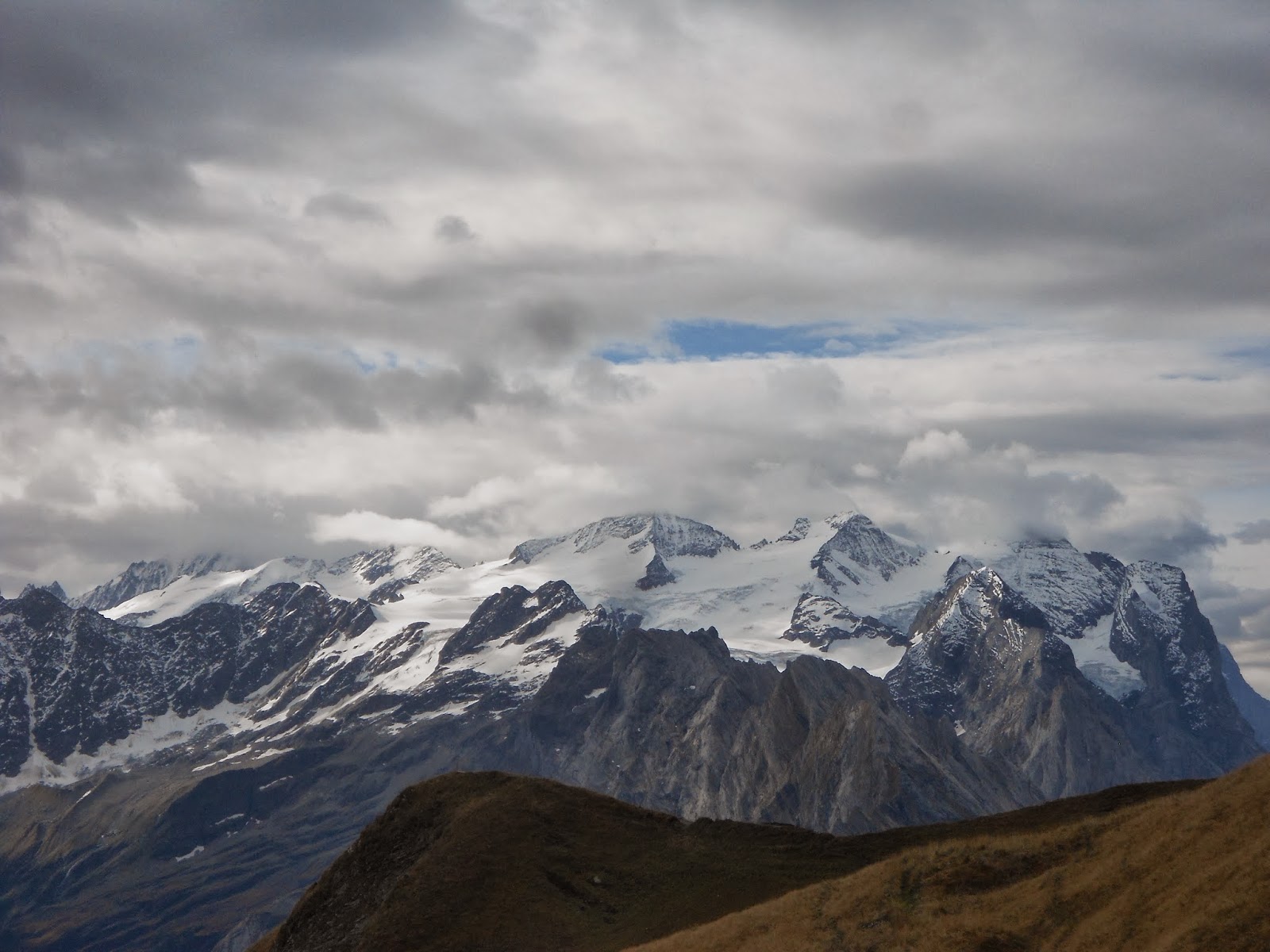 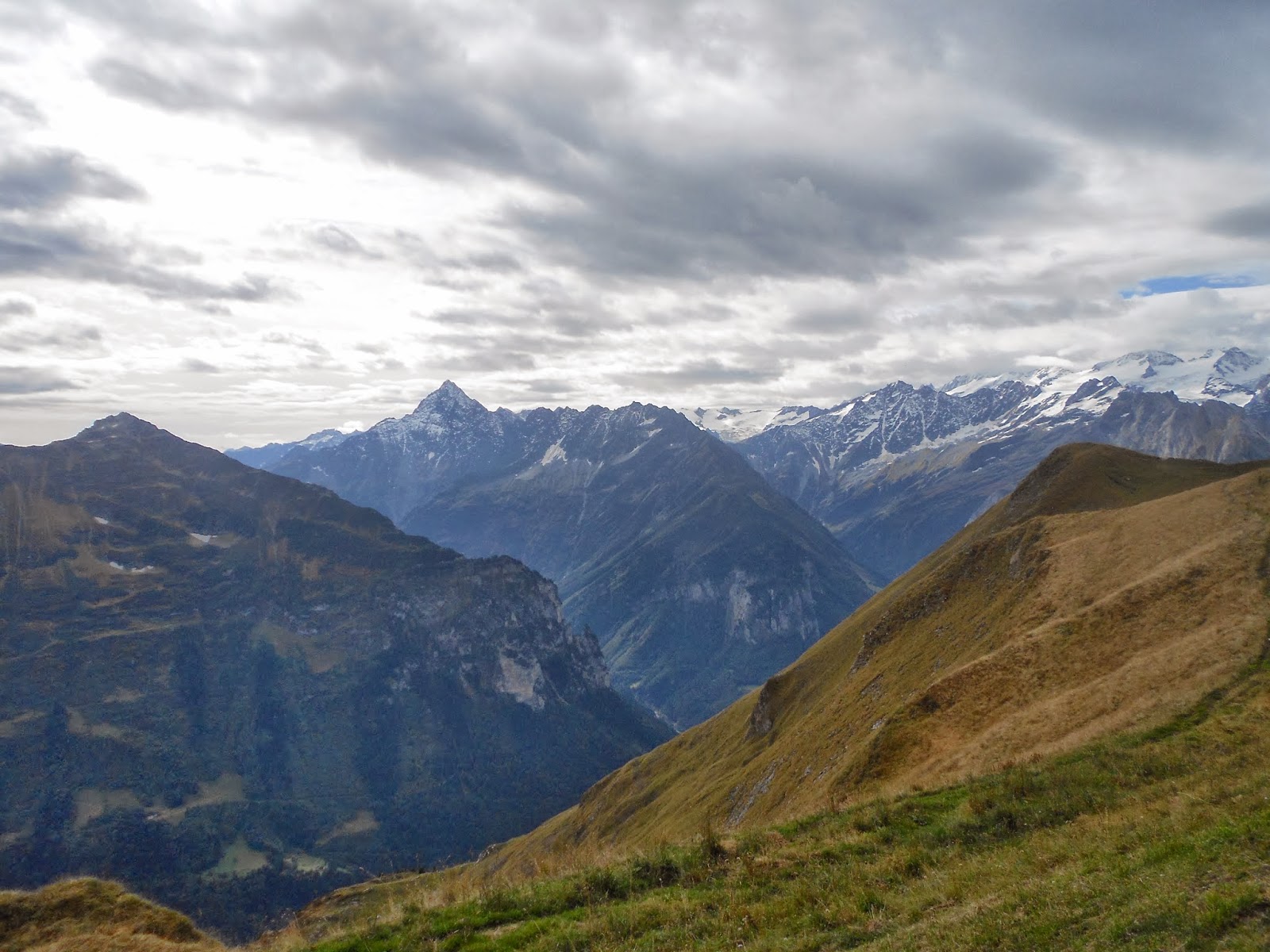 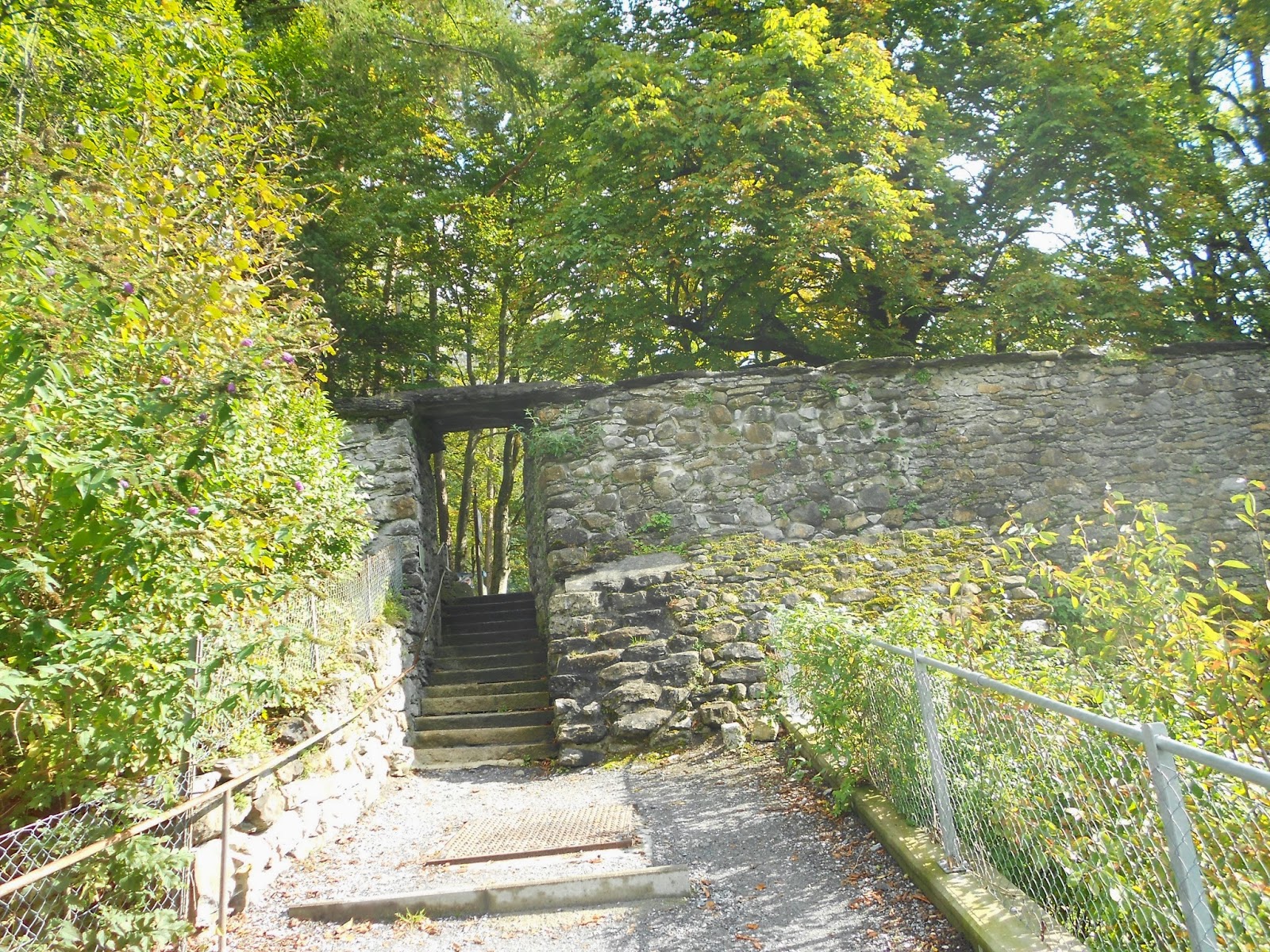 There are many other things to do at Meringen as well – and thanks to Haslital, I did participate in some – but that did not relate to Sherlock Holmes (the activities are listed in the programme drawn up by Haslital). However, when we plan out the Sherlock Holmes Society of India’s visit to Meiringen, we can do the other “fun” activities as well. I really cannot adequately emphasise how gorgeous this place is. 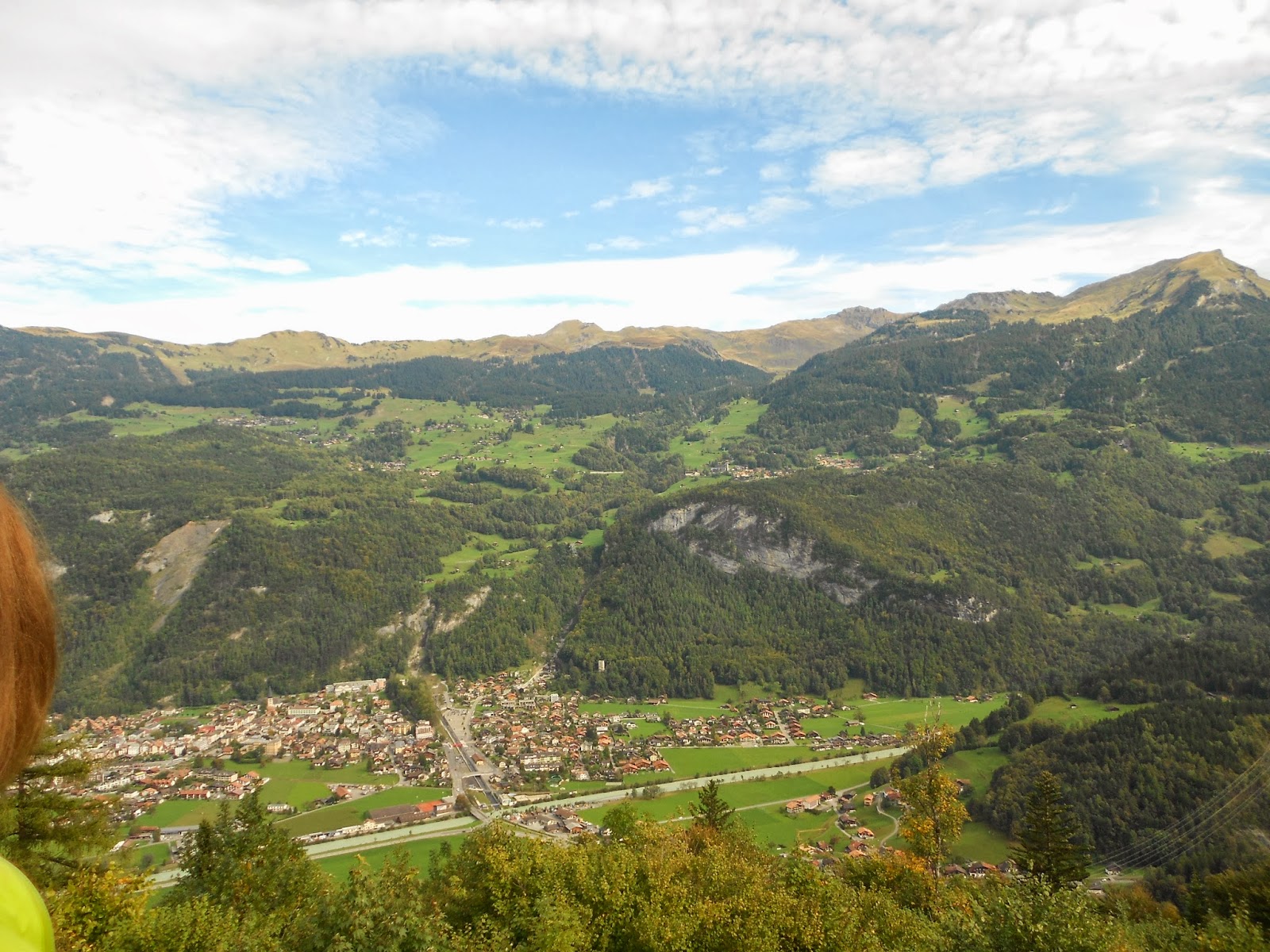 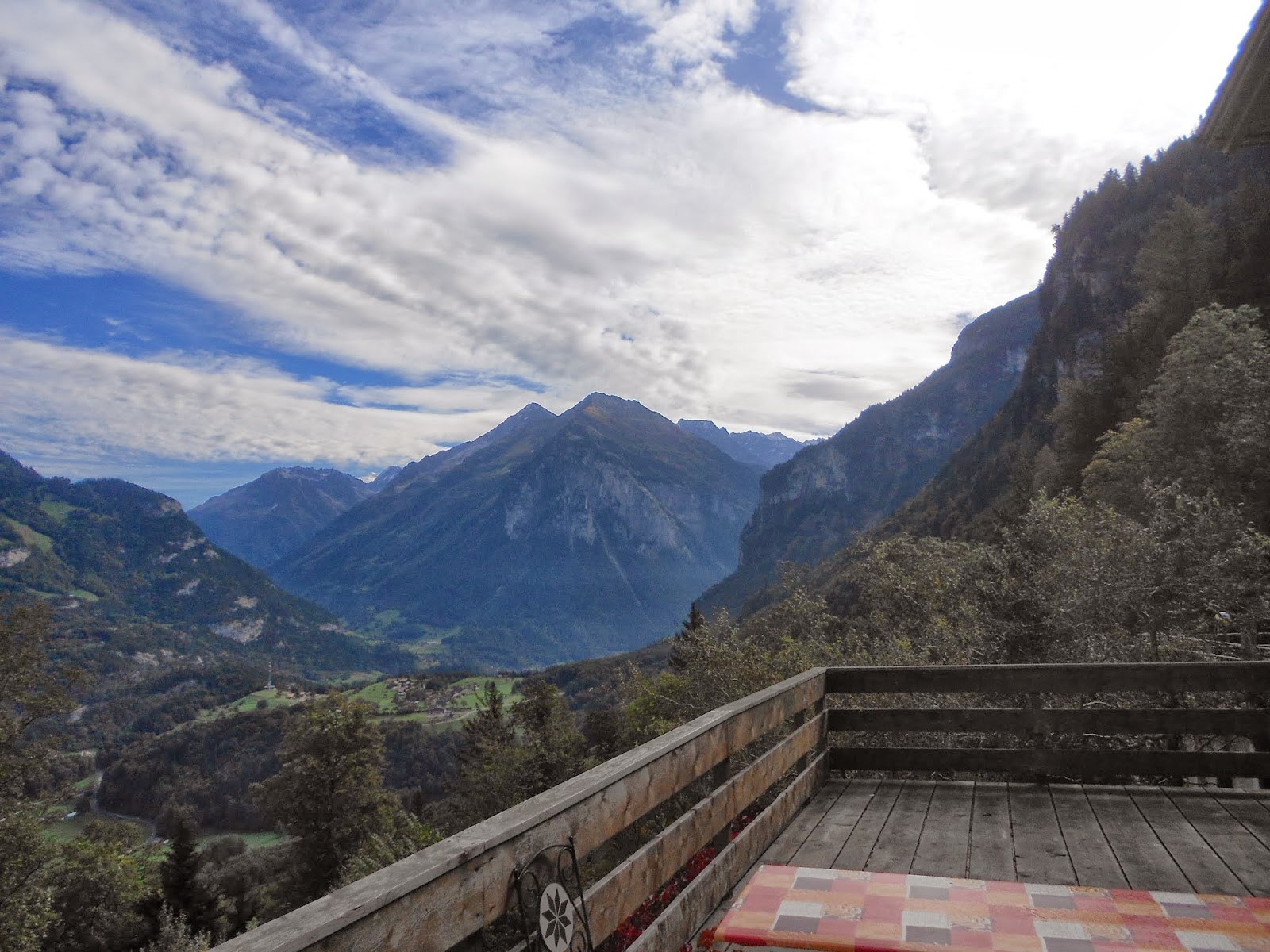 We must go to Meiringen. Really. I certainly intend to return as soon as I can.
Posted by Dea at 10:51 AM